The world’s earliest brewers were women; from ancient Sumeria to medieval England, women were responsible for crafting the barley-based beverage that is so often associated with bearded men today. So, what changed? How and when did women start brewing, and why did they stop? In this three-part series, I’ll explore the origins, devolution, and re(volution) of women’s role in brewing. For the first instalment, let’s start with the understanding that the female-dominated craft of brewing developed in much the same way all over the world.

Installment One: The Origins of Women in Brewing

Ancient Sumerians believed that beer was a gift from the gods, intended to promote health and happiness. While some evidence suggests that the malty beverage may have been around as early as 10000 BCE, the chemical testing of ancient pottery found in modern day Iran confirms that humans have been brewing beer for at least 7000 years (Nurin and Mark). From the beginning, brewing was a was job for the woman of the house, who crafted it to serve to her family along with their daily meals. 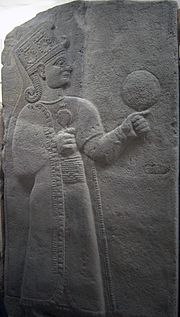 The earliest beer was made from a combination of bippar - a twice-baked barley bread - and water; beer and baking went hand in hand. In addition to providing their families with a delicious, filling, and sanitary beverage, brewing gave women a chance for public recognition and appreciation. Alewife and tavern-keeper Kubaba, for example, is the only Queen listed on the ancient Sumerian King List. She reigned for approximately 100 years beginning in 2500 BCE (Livius).

The production of beer in ancient Mesopotamia skyrocketed under Babylonian rule and was eventually commercialized. In order to govern this new industry, laws were created as part of the Code of Hammurabi. The language of these laws reinforced the fact that women were primarily responsible for brewing - and for tavern keeping - as the term for tavern-keeper was a feminine word. Paragraphs 108-110 dictated the punishments for women found guilty of under-serving (death by drowning) and serving beer to conspirators (death). They also banned women who had entered religious service from visiting or opening a tavern, citing a punishment of death by burning (King).

Egypt’s brewing history parallels Mesopotamia’s. Women were the original brewers, crafting beer in their homes both for daily consumption and to provide offerings to Tenenit, the goddess of childbirth and beer (Mark). Yes, the ancient Egyptians had a goddess of childbirth and beer. Awesome! When beer was commercialized to use as payment for labourers who worked on the pyramids, however, women took a step back and men took over production. More on this in the next instalment. On the other side of the ocean, findings from an archeological dig in Cerro Baul, Peru, tell a similar story. Researchers found the remains of an ancient brewery, which was littered with decorative shawl pins. These ornaments have been used as proof that women were chiefly responsible for brewing the beer-like chicha. More than that, archeologists claim that these pins were only worn by women of high rank, suggesting that brewing was an elite responsibility (Biello). These findings were the first evidence that the Wari people, who occupied the site from approximately 600-1000 CE, were a female-forward brewing culture.

In Europe, German housewives were brewing beer for consumption by their families as early as 800 BCE (Mark). One woman in particular, though, had the greatest lasting impact on the beer that we know and love today. Hildegard von Bingen (1098-1179) was a German benedictine nun known for her work in the natural sciences. Her pharmacopoeia, Physica, is said to include the first written evidence of using hops in the brewing process: “"[Hops], when put in beer, stops putrification and lends longer durability” (Frank and Meltzer). Von Bingen’s review wasn’t all positive, though. She cited that hops had the ability to “induce melancholy and weigh down one’s insides” (Kitsock). Heavy insides or not, her research contributed to the widespread use of hops as a preserving agent in beer. By the early 17th century, all beers across Europe had been hopped (Oppenheim).

While the English and the Germans continue to dispute who started brewing first, there is no doubt that women were the earliest brewers in both nations. In medieval England, as everywhere, brewing was one of a housewife’s many domestic responsibilities. It was also one of the most stable and profitable career choices for women at the time, allowing them to sell excess liquid not consumed by their families - no education or land ownership required. At the peak of female-dominated brewing in England, all capable brewsters were able to turn a profit. It was the only industry that provided opportunities for married women, single women, and widows alike. It’s important to note that medeival records show that most women only brewed for profit during transitional periods: before marriage, between marriages, or in times of poverty, for example; Lifelong brewsters like Maud London and Margery de Brundall are presumed to have remained unmarried (Bennet, 40). Based on the limited freedoms that women had in the medieval period, brewing provided a unique opportunity for independence.

When Europeans first colonized America, they continued their brewing traditions. This included the dominant role of women in the brewhouse, where ladies served as both brewers and tavern-keepers. Housewives also included brewing in their long list of domestic duties; even Martha Jefferson is said to have been an avid homebrewer, though her famous husband Thomas has been given most of the credit for her work (Schell). In 1743, Mary Isle became the colony’s first commercial brewster after she took over her father’s brewhouse in Philadelphia (Schell). By the late eighteenth century, however, household brewing was on the decline and society was shifting to embrace the male-dominated beer industry that continues today.